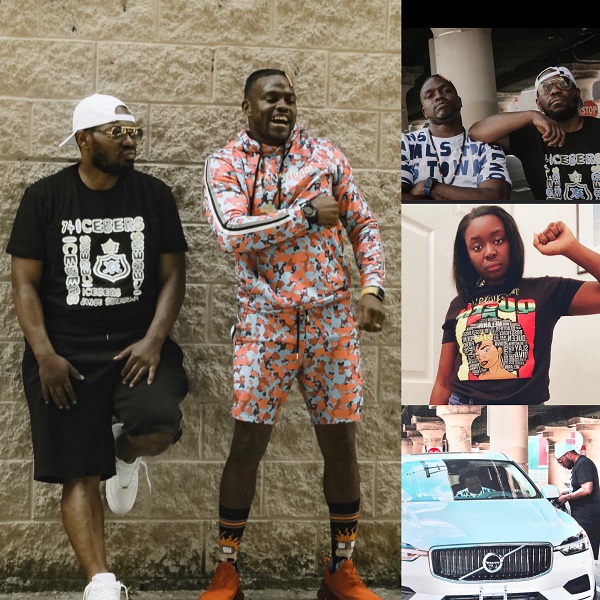 “We’re putting some positive messages out there,” said Phillips, better known by his stage name TopNotch772. “Beanie’s verse talks about how he feels with what’s going on in the world today and it’s a little more mellow, and my verse comes at the same thing from a different perspective but it’s a little more upbeat. The overall message is that we’re gonna make it. And that’s the kind of music I want to make – positive messages that people can listen to when they’re going through something and they’re on the edge and they feel like giving up. My music is inspirational, uplifting and a little bit of street at the same time.”

Those inspirational messages come from a life filled with a lot of pain. TopNotch first started rapping as an outlet for his emotions after his father was robbed and shot in the head. He and his father were very close and the loss was abrupt and deeply painful. He said he couldn’t turn to his mother during that time, either as she was addicted to drugs and wasn’t present. But Rap was just a side hustle that helped him emote, his real passion was football … and he was good at it. So good, in fact, that he was invited to the Buffalo Bills professional team’s minicamp. Though he didn’t make the 52-man roster, he knew he had the kind of elite athleticism to succeed at a high level and he pursued it hard … until yet another tragedy struck.

While practicing with his professional indoor football team, he went up for a pass and came down wrong and snapped his tibia and fibula in half. The compound fracture had bones sticking out through his skin. The inner pain of his past was now mirrored by very real physical pain, and the two bounced off each other as he soon learned that his career as an athlete was over.

“Pain is the reason I want to rap and share my story,” he said. “I know there is someone going through similar things to what I went through, and I know I can help them through music.”

When he turned his full attention to music, TopNotch started gaining traction and making waves in the industry. He opened a show for Trick Daddy at a club in Cocoa Beach, Florida and has also opened for Yolanda Adams, Detrick Hadden, Tye Tribbet, Jessica Reedy and Fred Hammond. His previous single, “We Gotta Move” was on heavy rotation on multiple radio stations, followed quickly by more radio play from his song “Ain’t Nobody Mad.” Now with “We Made It,” TopNotch hopes to continue that success and expand his fanbase on more of a global level.

“I’m never going down again,” he said, nodding to the meaning of his stage name. “No matter what it takes, I’m gonna stay up. I’ve lost people and I know how that feels, but instead of getting angry, I started writing songs, then doing shows, then next thing you know I’m opening for people like Trick Daddy. What got me started was pain and not wanting to find different unhealthy outlets for that pain, and I’m not gonna let anything bring me back down.”

To listen to TopNotch772’s music or to follow him on social media, please visit: