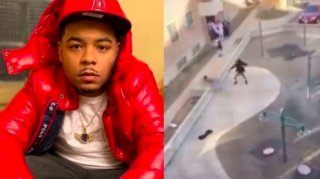 According to reports, the cast of Only The Family has suffered yet another setback. OTF ARoy was shot and murdered in Chicago’s O’Block on Monday (December 13), according to Say Cheese, after a confrontation with the suspect.

ARoy was pummeling the guy and saying, “You’re a grown-ass man,” in a Facebook Live video of the altercation. “You’re a grown-ass man. I’ll fuck you up!” The man lay still on the ground for a little while, and the conflict looked to be done. However, when ARoy walked away, the man pulled out a revolver and fired several times into his torso, killing him.

According to another account, the lady who shot the video was beaten after she posted it online. A woman is seen on the ground being stomped on in a video of the alleged event, as bystanders scream in the background.

Over the last 18 months, the OTF collective has suffered a succession of catastrophes. In November 2020, King Von was tragically murdered outside of an Atlanta hookah club. Then, in June, Lil Durk’s older brother, OTF DThang, was assassinated outside a Chicago strip joint.

For years, OTF founder Lil Durk and his associates have been involved in street life. Lil Durk and the late King Von were arrested in June 2019 on allegations of attempted murder.

Prosecutors alleged the two rappers robbed and shot a guy for a Jeep Cherokee and $30,000 outside a renowned Atlanta drive-in that same year. Durk and Von were freed on $250,000 and $300,000 bail, respectively, after weeks in jail.

However, Lil Durk’s star power has only grown in the previous two years. The Grammy Award-nominated artist’s debut album, The Voice, debuted at No. 2 on the Billboard 200 and was certified gold by the Recording Industry Association of America in 2020. (RIAA).

The assassination of OTF ARoy is the latest in a lengthy line of shooting-related killings. On November 17, Dolph was slain while picking up cookies from his favorite neighborhood bakery in Memphis. His assassination remains unsolved.