Seasoned artist hailing from Pennsylvania, Maine The Medicine recently linked up with Canadian emcee, Suspect for the highly anticipated album, “The Last.”  The lyrical assassins deliver an epic dose of ear milk and lyricism authentic to traditional Hip-Hop flawlessly blended with unique rhyme schemes. I had the opportunity to meet with Maine to discuss the album.

MJ: I’m eager to dive right into the album to give fans and listeners a personal inside look. First tell us how you linked up with Suspect?  In creation mode did you already have him in mind for the album.

Maine: We met at a show in Scranton PA, when Suspect and Marmel were performing on the Adlib Tour. The respect was mutual once we both hit the stage. We stayed in contact, knocked out some collaborations and tossed around the idea of putting together a project, which makes sense because we both share the same taste in Hip-Hop. We decided it would be dope to put out a Mercy Gang and Marmel Mixape “Cross Border Connection” which would turn out to be Hefty’s (rip) last project with all of us. In honor of Hefty we agreed to release the mixtape and dedicate the Canadian Tour to the memory of Hefty.

Suspect: Maine is one of the most lyrical artists I know. So that there was enough of a challenge for me to create the best of bars. Since the whole concept of the album “The Last” is about real Hip-Hop becoming extinct, it only made sense for us to deliver it out. Working with Maine before I knew our chemistry was bananas and we also share the same music influences and styles.

Maine: We named the album “The Last” because we truly believe we are a last of a dying breed. Last also stands for Lyrical Assassins Stay True.

MJ: Share the story line behind the cover art and album title.

Maine: The cover was a way to display the unique bond between the US and Canada in the Hip-Hop world. We also wanted to show the history of our projects with our respective groups. 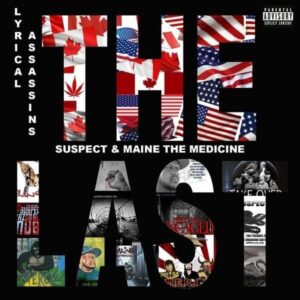 MJ: Artists strive to top previous released albums to display growth and versatility. What was your expectation with this album? Through your eyes and mind what were you aiming to convey to listeners? Do you feel that’s been achieved?

Maine: We wanted to bring back that gritty boom bap, Hip-Hop. I feel like we really pushed each other’s pen which brought the best out of both of us. We wanted the listeners to indulge into some great beats and dope ass lyricism along with raw energy we bring to the tracks.

MJ: Let’s talk about some of the tracks. Do you have a personal favorite, or one record that speaks to your heart a bit more than the others?  You know MJ well enough that I’m sure you can pinpoint one of my favorites. Although I must say it was difficult to choose just one as this album carries timeless tracks with no skipping. But l do want to talk about “Hip-Hop” and how you define that record.

Suspect: My personal favorite is “Behind Every Smile.” My verse specifically is very important. I wrote it as it was a letter to my son who I have been going through custody battles with for the past 4 years.  “Hip Hop” is basically everything we feel about the culture of Hip-Hop, the likes and dislikes, that we have seen throughout the years.

Maine:  I love the raw in your face tracks like “Rough Shit” and “Blah Blah” with U.G. The tracks close to my heart are “Close To You” and “Behind Every Smile.” “Behind Every Smile” is a special track for both of us. I talk about my health and as he mentioned, he talks about his son. The track was produced by Nate Williams and the beat just brought out raw emotions from both of us. “Hip Hop” was produced by Will Sully. I felt some real nostalgia with that beat, it made think of some real Hip-Hop moments in my life. We are very proud of “The Last” and both the producers and artists who contributed to the  project, from Real Wolf, Snowgoons, Native Seals, Know It, legendary U.G. of Cella Dwellas, to features with Adlib, Marmel, Holla Da scholar, Khali Hustle, Lucas Hex, and more.

MJ: On a more personal note, can you share a little bit on the adjustment of creating music without Hefty (rip)? I’m sure there must be an overwhelming sense of different emotions.

Suspect: Speaking for myself knowing Hefty and creating music with him was a blessing, he had such a strong love and drive for it, and to have him part of our first project “Cross Border Connections” was amazing and you can see the strong bond with his fans and Mercy Gang brothers still to this day .

Maine: For me, it’s still hard making music without him here. I’ve learned a lot of things from him that I still use now. I think he would love the music were making now. Hefty will always live on in our music.

MJ: Is there anything else you would like the world to know about “The Last”?

Suspect: This will not be the only or the last time u will hear “The Last”!!!!
Maine has grown to be more than an artist I work and tour with he is family. I am super proud of this project and think it’s some of my best work I have released to date!! Look out for much more to come from “The Last.”

Maine: I want to mention we will be joining The Last Tour in Canada with Steve Sxaks and Kohn of M.A.D.E and we are excited to perform hits off the album.