According to reports, Lil Reese was detained last month for serious violence on a family member. His initial arrest occurred on May 19, and, according to online Harris County Jail records, he was quickly refused bond. His bond was set at $60,000 and was never posted on May 24, five days later.

Rapper, 29, might spend an additional month and a half in jail because he is scheduled to appear in court on August 16. 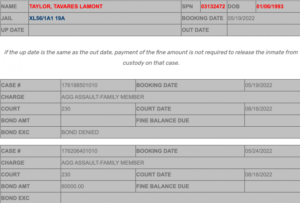 Reese was charged with misdemeanor domestic assault after getting into a violent fight with his girlfriend more than a year prior to his arrest. Police were summoned to Reese’s house in May 2021 at about 10:30 p.m. local time with complaints of a brawl. Reese was then taken into custody.

“That shit was fake,” he told Fucious TV about the charge. “That was just an argument going on. Someone seen us arguing and called the police, so when the police came they already knew who I was. So they were like, ‘Aight, we finna just lock him up.’”