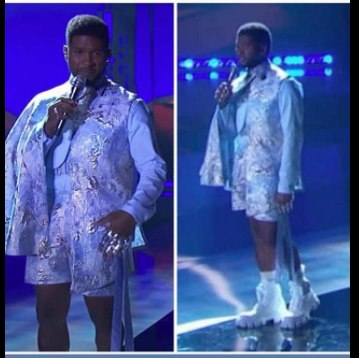 Fashion is a huge thing in the hip-hop world. However, fashion has evolved tremendously through time, particularly in menswear.

It all began when a user commented on Usher’s resemblance to a Grambling University Majorette.

According to one Twitter user, “@Usher Yo WTF is this Dude have you lost all self respect for yourself @ Usher cause this aint the dude I watched Growing up but I guess your fame is worth the embarrassment Y’all disappoint me with this shit.”

Another person said on Twitter, “I was gonna say, he’s trying to do like Prince, but then I saw the shorts and realized Usher NEVER did this before & had a successful career…. so I dunno, somebody must’ve told Usher to do it.”

One person even suggested that Usher and Diddy had a thing going on.

According to one Twitter user, “This is sad. I expect shit like this from a new artist that aint touched no real money yet. I aint pocket watching but I figured between the record sales the movies the cologne and whatever real estate you can buy in ATL that he would be beyond this.”

Another person went so far as to imply that Usher was allowing Dwayne Wade to style him, to which another user replied, “Naw..naw.. He letting GABBY dress him you meantFace with tears of joy. Cuz thats whos Dressing Dwyane and his son! smh”

Now, we’re not here to tell you what you can and can’t wear, but what are your thoughts on Usher’s new fashion choices?