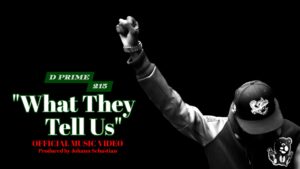 Philly’s own prolific emcee, D Prime 215 delivers more mind-blowing realities in his latest video “What They Tell Us.” The single/video, produced by Johann Sebastian, is off Prime’s latest “Sacred Mantra” EP, available on all major platforms.

“Mass media controls how many people get their news. The issue is, it’s not always accurate or close to it. When it comes to Black Folk, accurate isn’t even a thought most of the time. Negative statistics and stereotypes permeate the media as the overpowering narrative. This one-sided narrative is viewed as Gospel by those who don’t come in to contact with Black Folk on a regular basis if at all. As a Black Man, being viewed as the sum of negativity is asinine to me, as if that’s ALL we are. This record is my 2 Cents on it. I present to you “What They Tell Us.” Press Play.” – D Prime 215

The video is a simple one, just D Prime walking through his city of brotherly love. Because of his intricate wordplay and ingenious lyricism, there’s no need for gimmicks to entice viewers in. Also, a mini-film or animation, etc., would just take away from Prime’s lyrical declaration.

Prime addresses stereotypes placed on African Americans repeatedly for centuries. He also claims his human stance, free of felonies and other negative connotations. He goes on to mention that deliberately damaging advancements for African Americans must come to an end.  It makes you raise an eyebrow and wonder if others were just born jealous.  Prime delivers his revolutionary rhymes over chilling, hair-raising production blended with classic cuts and scratches. Watch “What They Tell Us” and connect with D Prime 215 and Johann Sebastian below.

In the English language, the word “Prime” is defined as “of first importance”. One could certainly say that Philadelphian emcee D Prime 215 has christened himself appropriately, as hip-hop has been of first importance in this young man’s life since he picked up a pad and pen in 2009. You can hear the warm, “golden era” sounds of J Dilla, A Tribe Called Quest and hometown heroes The Roots pulsing through his music, but with an updated, current twist. Prime’s held his own on wax with underground veterans like Reef the Lost Cauze, Hezekiah and Has-Lo, and shared the stage with heavyweight names such as Torae and Marco Polo. His approach is straightforward, his words honest, and his work ethic diligent. D Prime 215 is on a mission to create songs that stand the test of time, and with his unique blend of the old and the new, he’s sure to accomplish just that.