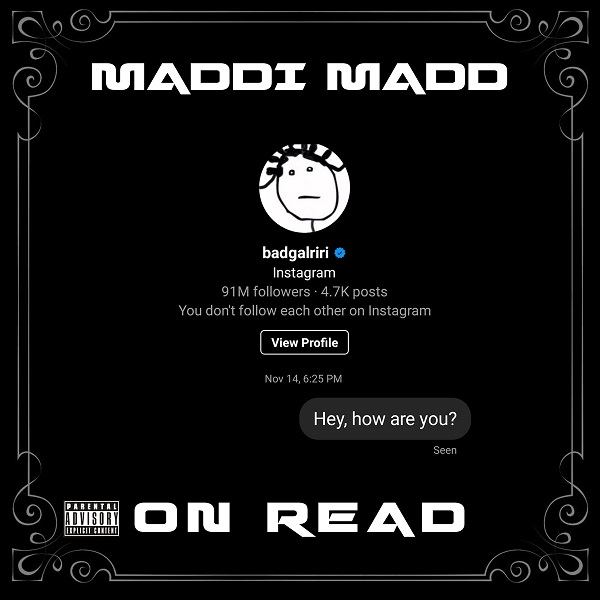 AKRON, OH – MADDI MADD is highly regarded as one of the top emcees in all of the Midwest. Hailing from the same hometown and NBA legend Lebron James, this internationally known juggernaut of hip-hop delivers superior metaphors laced with powered street anthems and lyrical content that’s proven time and time again to both inspire and challenge listeners of all ages and demographics. He has been shot but not stopped, imprisoned for his mission, surveilled and trailed, and he has a story that very few have lived to tell.

His latest hit is a song called “On Read,” which is set to drop across all streaming platforms on April 9. It’s the first single off his forthcoming album “Success 2,” which should be released this June. Inspired by an interaction with legendary artist Rihanna (displayed on the cover art for his song), the single is a shout out to all the women of the world who don’t give good guys a chance.

“I sent (Rihanna) a DM and she looked at it and kept it pushing,” MADDI said with a laugh. “She left me on read. There are a lot of women out there we feel like we’d be a good match with and some aren’t taking that chance. They’re looking at the messages and not responding to them. I’m not one of those guys you shouldn’t respond to. You should respond. I have your best interest at heart. I’m not a weirdo just sending you random messages.”

As the first single off “Success 2,” MADDI said “On Read” is the perfect song to introduce a project that will touch on a little bit of everything. Though he’s been in the music industry for more than a decade, he had to take a bit of a hiatus due to circumstances beyond his control. He also lost more than $1 million of money invested into his craft and his own label, Blimpcity Records, due to a federal case that targeted people close to him. In his words, he was “too close to the fire not to get burned.” Those experiences put him in a different mindframe, he said, and directly led to the music he created on “Success 2.”

“I want to do music the way I want to do music,” he said. “Those experiences dampened the way I created music, and I didn’t like that I couldn’t execute my business to the fullest degree. Earlier in my career I had a lot of success. The first project I ever sold was 200,000-plus. I collaborated with a plethora of artists – Jodeci, Flo-Rida, Bizzy Bone from Bone Thugs N Harmony, Rah Digga, The Outsidaz, C-Bo … I was awarded with two five-time multi-platinum plaques for Flo-Rida’s ‘Whistle.’ But it’s been a long, hard road since then. I had to rediscover my fanbase, and with this new project I want people to understand that these are lyrics and this is a real album. It’s not just a bunch of singles slapped together. The subject matter all comes together as one movement. It’s an album full of substance. I’m a lyricist and a storyteller, and I focus on the artform. I’m not your everyday rapper. I’m someone who has depth to his lyrics. I want to bring that back to music, and I want this album to be something people can play 25 years from now.”

“On Read” will be available to stream across all digital platforms starting April 9. MADDI MADD will also be starting in a hip-hop horror film called “Rhyme Slaya” due to be released April 27. To listen to MADDI MADD’s music, or to follow him on social media, please visit the following links:

(Video) So Vicious – The Reason @sovicious415