Dj Smoke is back on his mixtape ish!! Its about to get crazy!! 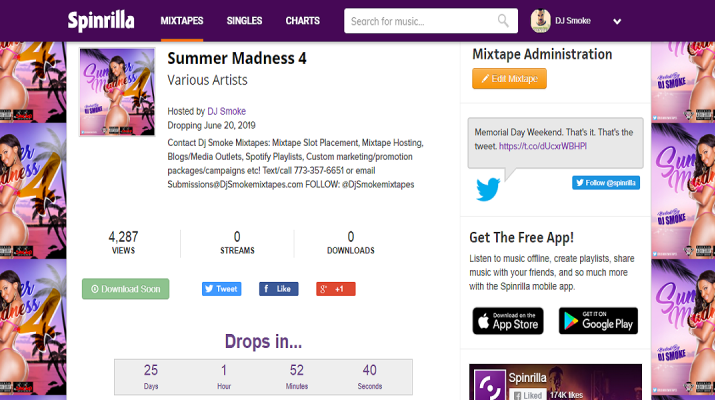 We also offer promotion packages, and marketing campaigns for your singles, albums, projects, streaming outlets as well as many additional services for artists. If your single is not being heard as much as it should, if you want to get your single to the people who are searching for new music we have created our services to help artists like yourself!

A huge benefit you get from being featured on Dj Smoke’s mixtapes is that your single could be heard by hundreds of thousands of people worldwide. We encourage all artists to share the mixtape within their state as well as sharing with people across their social media accounts. It’s mutually beneficial for everyone involved to share this mixtape with all of your supporters, and tell them to do the same.

Dj Smoke has worked with a plethora of artists within the past 11 years.

Keep scrolling down for more details on this service!

Release date: Summer Madness 4 is scheduled to release on June 20th, 2019 (this release date could change).

This mixtape slot service includes: 1 or 2 singles will be added to 1 mixtape. We will upload the mixtape to our network of mixtape platforms, and work it to be covered by some dope media outlets. 1 single will also be placed and promoted on www.djsmokemixtapes.com, and 5 additional blogs of our choice. We will promote the mixtape and your single via our social media network. We will provide you with a report which lists all of the places that our mixtape has been featured, and we will list all of the places that your single has been placed, we will tally up the total amount of streams/downloads the mixtape has received.

Submission instructions: After you have completed the purchase please submit your mp3(s), bio, at least 2 high quality images, social media information via Wetransfer or Sendspace to submissions@djsmokemixtapes.com or you can submit here after your purchase. Once we have received your order, we will email you within 48 hours to confirm your slot.

Please note: You can purchase your slot now and then submit your music at a later time (before the deadline).

Dj Smoke is back on his mixtape ish!! Its about to get crazy!!