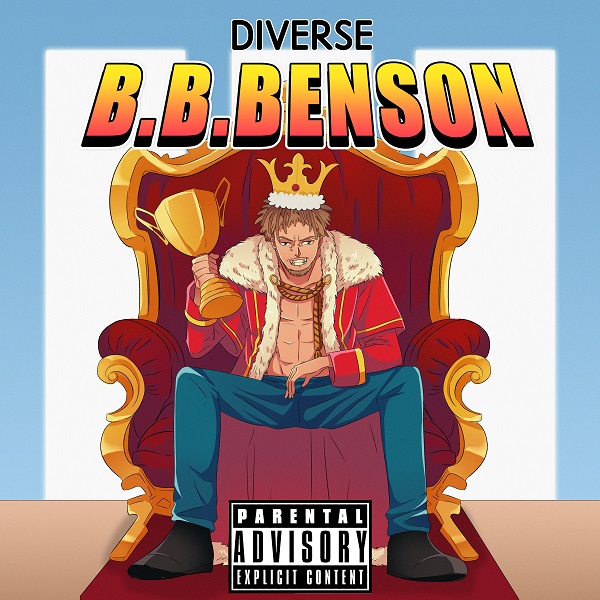 HAYWARD, CA – A new single from West Coast artist Diverse is bouncy and aggressive and fun –the perfect summer song for a year in which people are longing to have a good time. The feel-good vibes of “B.B. Benson” perfectly present this young up-and-coming artist to the world in ways that unabashedly show off his ability to deliver smooth flows with confident lyrics underneath an energy that is infectious. This song is guaranteed to get listeners amped.

“When I’ve got something to say, I gotta let it go and let it flow,” Diverse said. “It took me 40 minutes to make this song because it just came out so easy. Me and my boy were in the studio working and after we finished a track we’d been working on for a while he asked if I wanted to make another one. I said sure, and he played me a beat that was super energetic. For some reason, it made me want to whisper which I do at the beginning of the song, and then I come on strong. I’m like water – I can adapt to anything and any beat and I’ll make it my own, and this song is a perfect example of that. Last year, I was doing more melodic and Post Mallone type songs, and this year I’m coming with the hot energetic tracks. I like big-ass crowds and mosh pits and that kind of stuff, and this song is perfect for that kind of energy.”

Diverse first got his start in music at age 12 when he would watch his dad make beats in his studio. By high school, he had learned enough to start creating his own music and when friends and classmates started hearing his creations, they clamored for more. After graduating from high school, he and a friend would spend nearly every waking hour in the studio working on songs and experimenting with new sounds. He dropped his first mixtape in 2016, and then in early 2017 dropped his first album. More and more people began to take notice and he went on tour that year. His music began to be played on the radio and in the years since, he’s put up millions of plays on streaming platforms with his music.

“Diverse isn’t just the name I go by, it’s the type of music I create,” he said. “It’s also my personality and how I hold myself which is different from other people. There are different races in me. I was a jock in high school but also loved drama. I was always different than anybody else and my music is a representation of that. I have different flows on this song – I sound like three or four different people instead of just one – but I’m always keeping it real. My music will always be that – talking about shit I can talk about and be comfortable with. I want to choose the best version of myself and show that to the world, and I want to inspire people to embrace that about themselves as well. Just be 100 percent honest – that goes a long way and that’s what I want my music to be known for at the end of the day.”

To listen to Diverse’s music or to follow him on social media, please visit: