Positive K x MC Lyte Are “Still Not Having It” (Video)

Positive K x MC Lyte Are “Still Not Having It” (Video)

30 years later and BK’s illest female MC is ‘still not having it’ from 90’s  charismatic MC… Positive K and MC Lyte revisit their first collaboration “I’m Not Having It”, which ranked #16 on Billboard charts.

“This is the kind of song that can get nominated for a Grammy Award, a duet album would be phenomenal. I find it incredible that after 30 years MC Lyte and I haven’t skipped a beat. We have so much chemistry now as we did then.” -Positive K

The duo re-creates the classic and presents “I’m Still Not having It.” The animated visuals capture the unparalleled star quality between the two. K, who pulls out all the stops from flowers, diamonds, and smooth tongue talk to his irresistible lips just can’t seem to win over the no bullsh*t having Lyte.  The Brooklyn MC, acclaimed for her straight up ego crushing bars, knocks K down in every smooth-talking attempt he corners her with.

The back and forth lyrical flow are intact with quick-witted punchlines that will leave the ‘Wild’n Out” crew speechless and Hip-Hop eccentrics playing the record on repeat.

“A return to the ‘feel food’ days. I’ve always loved working with Positive K because that’s what he is, Positive. Working with him is easy and effortlessly, the music from “Still Not Having It” is one of my favorite songs from Bill Withers.” -MC Lyte

Watch the video above and stream “I’m Still Not Having It” here. 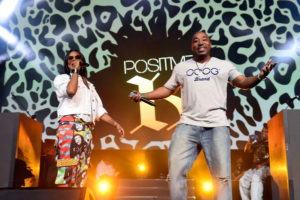